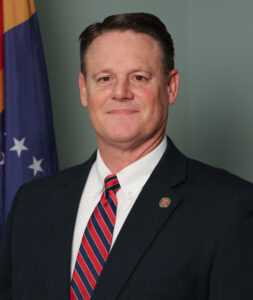 Lieutenant Colonel (R) Stephen C. McCraney was appointed as the Executive Director for the Mississippi Emergency Management Agency by Governor Tate Reeves, January 28, 2021.  Before assuming the role as Executive Director, Mr. McCraney served as the Deputy Director of the agency and as the Chief of Staff since February of 2016.  During his tenure, McCraney has worked on 14 federally declared disasters, six emergency measures declarations and numerous state emergencies.

Mr. McCraney has extensive experience in responding to natural and man-made disasters in Mississippi. While serving for 28 years as a Lieutenant Colonel in the Mississippi Army and Air National Guard, McCraney responded to Hurricane Katrina, the Smithville Tornado, Deepwater Horizon Oil Spill and the Mississippi River Flooding of 2011.

Mr. McCraney is a former Commander of the 47th Civil Support Team (WMD), Community Corrections Associate Director-Probation and Parole (MDOC), and a certified police officer, who has worked in higher education, city, and state-level law enforcement positions. McCraney brings to his position as executive director over 35 years of experience in the Criminal Justice System, Mississippi Army and Air National Guard, first responder and Disaster Management.  He received Bachelor and Master of Social Science in Administration of Justice from Mississippi College.

He has been married to Sandra Kaye Champion for 34 years and they have two children.